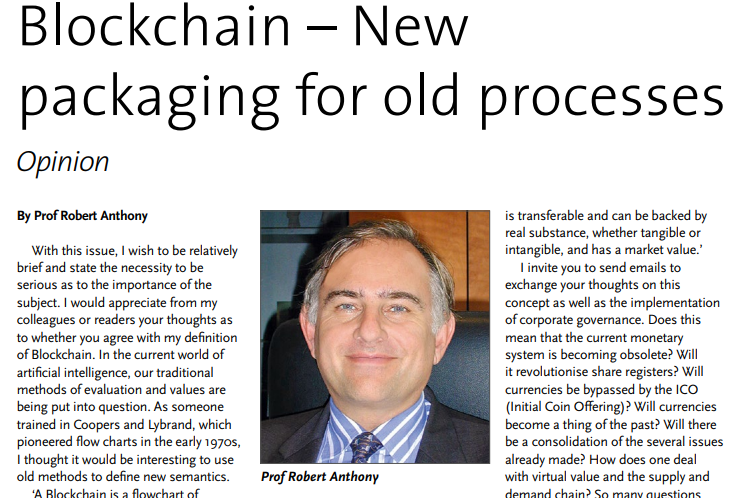 With this issue, I wish to be relatively brief and state the necessity to be serious as to the importance of the subject. I would appreciate from my colleagues or readers your thoughts as to whether you agree with my definition of Blockchain. In the current world of artificial intelligence, our traditional methods of evaluation and values are being put into question. As someone trained in Coopers and Lybrand, which pioneered flow charts in the early 1970s, I thought it would be interesting to use old methods to define new semantics.

‘A Blockchain is a flowchart of connected controlled transactions with a database represented by information technology being introduced to a central hub by way of unlimited variants which introduce connected sourcing vectors. The hub is frequently evolving by its own modification with the creation of additional data/substance made by a programmed origination (known as mining) or also obsolescence reducing the volume. The hub ownership has a value with a clear audit trail with security tags to avoid hacking and fraud.

The proprietorship is represented by an electronic reference known as a wallet, often held by an exchange platform as a custodian. The ownership is normally in reality by way of a coin electronically issued which is transferable and can be backed by real substance, whether tangible or intangible, and has a market value.’
Read more.

Follow us
Partager
LinkedInFacebookTwitter
Related posts
La Revue Bleue (FNAIM – Legal & practical information)
3 January 2022
Money laundering: the meshes of the net tighten!
16 November 2020
French Parliamentary legislation has to conform with the Constitution – The law may not be the law…
14 May 2018
Macron’s marvellous medicine – Robert Anthony assesses the likely impact.
7 June 2017
Panama Papers: the necessity to differentiate between tax evasion and non-evasion
2 June 2016