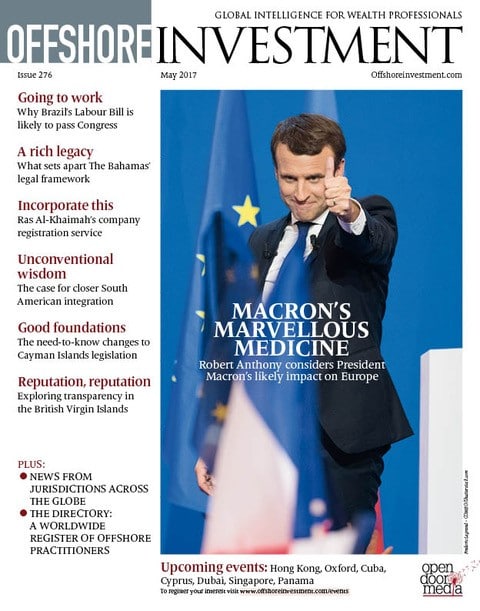 Emmanuel Macron’s rise to power on a reforming agenda carries big implications for tax
reforms and for the financial sector across Europe. Robert Anthony assesses the likely impact.

On 7 May, France witnessed an historic moment by electing Emmanuel Macron as President of the Fifth Republic. At 39, the former investment banker is France’s youngest-ever president although he did serve as minister of the economy. France’s newly created political party En Marche! is totally assuming its independence and its pro-EU position. THE CHALLENGE AHEAD Macron proposes an ambitious domestic reform agenda including cutting state spending and easing labour laws. France has for many years been strangled by the unions. The latitude a new president has to be creative for has proved a disappointment to the electors. In addition, as in many countries senior politicians have either studied politics or practiced as lawyers. Many do not have a commercial background or really understand how to run a business. What is a country? It is the largest income and expenditure account. Where does this lead to? Can one read into the future and quickly react to international crises? In the age of social media, news moves fast. Emmanuel Macron’s rise to power on a reforming agenda carries big implications for tax reforms and for the financial sector across Europe. Robert Anthony assesses the likely impact Macron’s marvellous medicine Professor Robert Anthony is Principal Partner at Anthony and Cie (MFO, France)

With his relative youth, Emmanuel Macron is often compared to the new generation called the “Millennials”. The French have chosen a leader from “Generation Y”; his personality clearly reflecting an emergence with different codes and new values. Macron attended a series of elite schools (studying public affairs at Sciences Po before graduating from the École Nationale d’Administration). After a career as an inspector in the ministry of finance, he joined the world of investment banking at Rothschild and Co. On being asked to return to politics, he was swiftly appointed minister of the economy. While in government Macron tried to pass legislation to modernise the notary profession and enable more shops to trade on Sundays. His legislation was diluted in the face of opposition. The Parisian notaries pushed through their demands to control fees more than before and the unions hardened their stance on Sunday trading hours. Voters around the world are fed up with corrupt politicians. They are unhappy with high unemployment and taxes. They have reached a stage where they want new faces and not old professional politicians who fail to honour their manifestos. They really want change. Macron took advantage of this to quit the government and create his own political party. His programme shows how important it is for him to change the working method of politicians and show transparency and responsibility. The press attack on the conservative candidate François Fillon polarised support for him culminating in his election as the new president. It is clear that Macron is a loyal European. He will try to modernise the EU with the close collaboration of Merkel in Germany. His election and policies stabilises and clearly secures the future of the euro. It also takes the pressure off interest rates.

Read the full article in Offshore Investment – May 2017