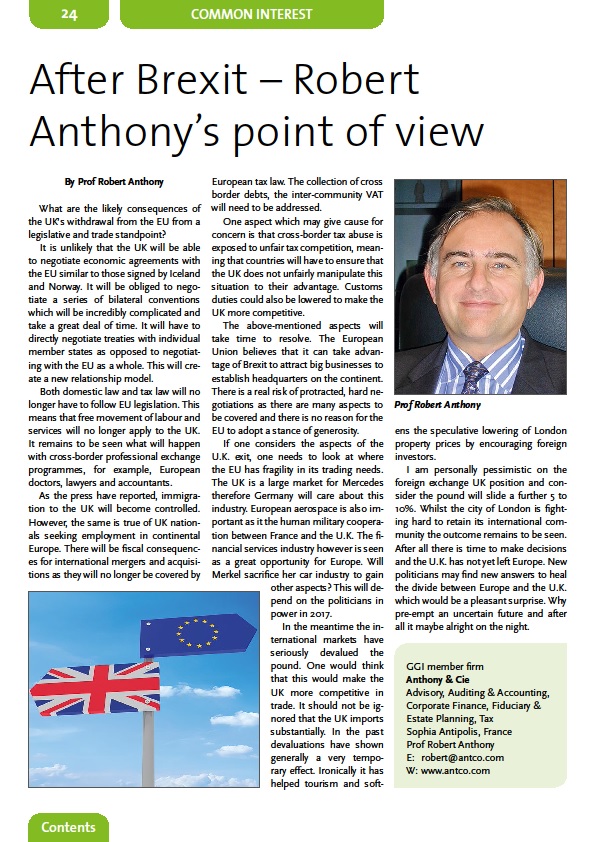 What are the likely consequences of the UK’s withdrawal from the EU from a legislative and trade standpoint? It is unlikely that the UK will be able to negotiate economic agreements with the EU similar to those signed by Iceland and Norway. It will be obliged to negotiate a series of bilateral conventions which will be incredibly complicated and take a great deal of time. It will have to directly negotiate treaties with individual member states as opposed to negotiating with the EU as a whole. This will create a new relationship model. Both domestic law and tax law will no longer have to follow EU legislation. This means that free movement of labour and services will no longer apply to the UK. It remains to be seen what will happen with cross-border professional exchange programmes, for example, European doctors, lawyers and accountants. As the press have reported, immigration to the UK will become controlled. However, the same is true of UK nationals seeking employment in continental Europe. There will be fiscal consequences for international mergers and acquisitions as they will no longer be covered by European tax law. The collection of cross border debts, the inter-community VAT will need to be addressed. One aspect which may give cause for concern is that cross-border tax abuse is exposed to unfair tax competition, meaning that countries will have to ensure that the UK does not unfairly manipulate this situation to their advantage. Customs duties could also be lowered to make the UK more competitive.

Partager
LinkedInFacebookTwitter
Related posts
La Revue Bleue (FNAIM – Legal & practical information)
3 January 2022
Season’s Greetings from all at Anthony & Cie
23 December 2021
Welcome on board!
31 August 2021
Buying property in France:it is easy if…
23 May 2021
Think about refinancing your French property to optimize your wealth planning
4 April 2021
The importance of keeping records in France for French property ownership and proacting protecting one’s interests
18 January 2021
We use cookies to ensure that we give you the best experience on our website. If you continue to use this site we will assume that you are happy with it.OkMore information