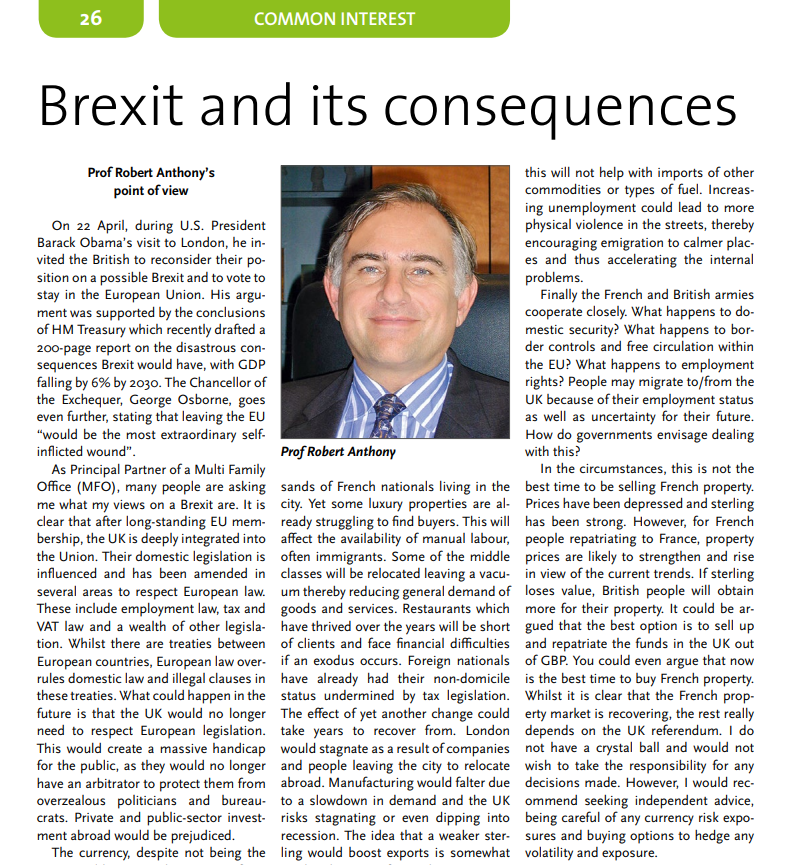 Brexit and its consequences

On 22 April, during U.S. President Barack Obama’s visit to London, he invited the British to reconsider their position on a possible Brexit and to vote to stay in the European Union. His argument was supported by the conclusions of HM Treasury which recently drafted a 200-page report on the disastrous consequences Brexit would have, with GDP falling by 6% by 2030. The Chancellor of the Exchequer, George Osborne, goes even further, stating that leaving the EU “would be the most extraordinary selfinflicted wound”.

As Principal Partner of a Multi Family Office (MFO), many people are asking me what my views on a Brexit are. It is clear that after long-standing EU membership, the UK is deeply integrated into the Union. Their domestic legislation is influenced and has been amended in several areas to respect European law. These include employment law, tax and VAT law and a wealth of other legislation. Whilst there are treaties between European countries, European law overrules domestic law and illegal clauses in these treaties. What could happen in the future is that the UK would no longer need to respect European legislation. This would create a massive handicap for the public, as they would no longer have an arbitrator to protect them from overzealous politicians and bureaucrats. Private and public-sector investment abroad would be prejudiced.

Written by Robert Anthony
Published in GGI INSIDER – May 2016